It’s taken a long time for the business world to wake up to the incredible power of humor…as a differentiator and a catalyst for enhanced morale, engagement and productivity.

But now, stand-up comedy is a required three-credit course for ALL Stanford MBA students. And the Harvard Business Review and New York Times have written in-depth articles about why humor is “of the moment.”

Our new podcast, Laughing Matters will feature guests from all walks of life who share one belief: laughing matters. It matters a LOT.

We live in a time when laughter, comedy and humor has never been more important to everyone’s wellness.

So sit back, relax and prepare to listen to how and why laughing matters so much to our amazing guests.

You can access the latest episodes on Buzzsprout. You’ll also find us on Apple Podcasts. 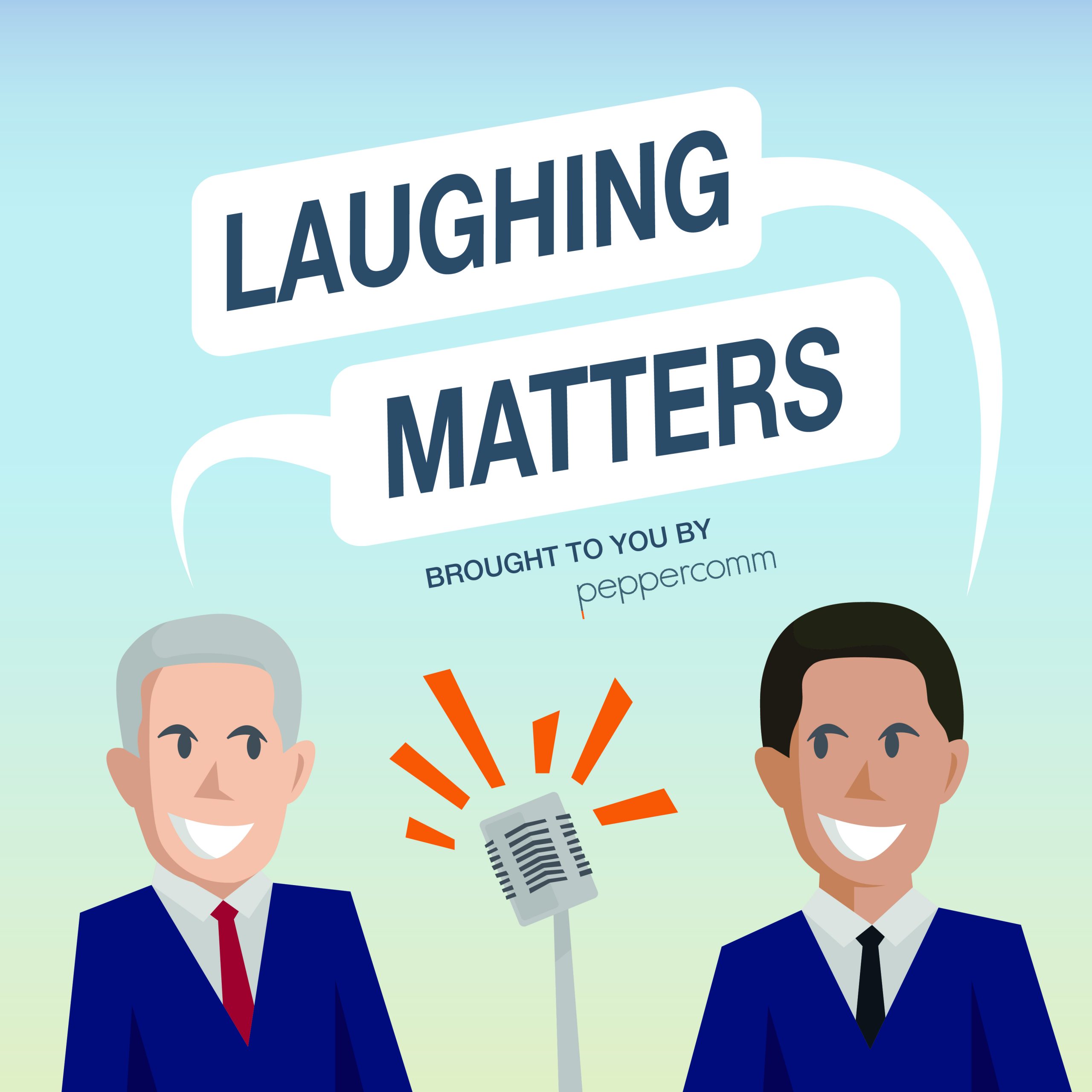 Episode 13 – Life got you down? Reframe it! Comedian David Horning joins Laughing Matters and teaches us a fresh take on how to reframe even the most difficult situations (hint: make a conscious choice to poke fun at yourself). In this podcast, you’ll learn:

Listen to the full episode here.

Episode 12 – How to decompress: the “Coach” dishes on his game plan. Teaching business execs how to be leaders while not taking themselves too seriously is no small feat. Our latest Laughing Matters episode features renown executive coach Ken Jacobs, who talks about critical ways for leaders to blow off steam. His insights include:

Listen to the full episode here. Episode 11 – Putting smiles back on people’s faces. Listen to our insightful discussion with renowned comedian Clayton Fletcher, as he weighs in on how the business world has gone from looking at comedy and humor as a “nice to have” to a necessity that helps solve different challenges and pain points with their employees and client interactions. Clayton also discusses:

Listen to the full episode here. Episode 10 – Share your whole weird self. We’re joined by Liz Joynt Sandberg, who talks about her role as Head of Comedy Arts at the Theatre School at DePaul University and how helps students and businesses bring their most unique, “weird” parts of themselves to the performing arts. Liz also shares:

Listen to the full episode here. Episode 9 – From journalist to doing stand-up comedy at Caroline’s Jon Gelberg is executive editor of content strategies at Inc. Media, but he also moonlights as a stand-up comedian in the New York comedy club circuit. Listen to our latest episode to hear Jon talk about how he got into comedy, some of his embarrassing moments, and how he overcame a serious medical diagnosis with humor. Jon also shares:

Listen to the full episode here. Episode 8 – Using humor in a global business to “freakin’ lighten up.” Angela Sullivan, head of communications for the Americas at Xero, a New Zealand-based company and a Peppercomm client, sits down with Steve and Paul to talk about how humor works in a large, global organization like Xero, and how the business owners they serve are learning to take a lighthearted approach in a challenging climate. On this episode, you’ll hear Angela’s thoughts on:

Listen to the full episode for more! Episode 7 – Disagree while remaining civil? Two top CNN commentators say it’s possible! While Washington does its best to scoff at bipartisanship, two extraordinary women from opposite sides of the political spectrum have made it work – discussing serious matters while keeping it upbeat. Join us as we speak with CNN commentators and political/communications consultants Maria Cardona and Alice Stewart about how they are able to accomplish this. On this episode, you’ll hear:

Listen to the full episode for more! Episode 6 – A pope, a rabbi and a publicist walk into a synagogue… Communications professionals are behind the scenes at pretty much every major event you can imagine, and few are as versatile or cool under pressure as Jody Fisher, award-winning publicist and vice president at Austin Williams. Listen to some of his stories from working in journalism and PR:

Listen to the full episode for more! Episode 5 – When Ryan Reynolds takes you to dinner. What do you do when your significant other breaks up with you, but you already have a vacation planned with a plane ticket in that person’s name? Well you look for someone with the exact same name on Reddit, of course, which will then lead you to be part of a reality TV-like saga that culminates in Ryan Reynolds taking you to dinner and saying he’d love to play you in an upcoming biopic. Join us as guest Jordan Axani, co-founder and educational director of Shift Collab, shares how his impossible story was part of the reason he embarked on a career advocating for mental wellness and owning your most vulnerable and cringeworthy moments. Click here to listen to the episode: Episode 4 – How to deal with a cold on Air Force One. Special guest Anthony Scaramucci, head of global alternative investment firm SkyBridge Capital, joins Laughing Matters to talk about his infamous 11 days as White House Communications Director under then President Donald Trump and regales us with some of his best anecdotes involving Steve Bannon, Reince Priebus, Sean Spicer and others. He also tells us why he believes self-deprecating humor humanizes every leader, and gives us a perspective from his “end” on how he got treated for cold symptoms on Air Force One. Click here to listen to the episode. Episode 3 -Leading with humor means… Facebook jam sessions! What do you do when you need to bring some levity to the world in the middle of a pandemic? For our latest guest, it’s hosting weekly musical jam sessions from his basement and streaming them live on Facebook! Join us for a compelling conversation with Jon Harris, Senior Vice President and Chief Communications Officer at Conagra Brands, who talks about how he came up with the idea for his weekly music segments, who he’d dream of rocking out with, and some great examples of how he has led with humor for some impressive and award-winning campaigns in the food and beverage space. Click here to listen to the episode (Advisory: This episode contains explicit language that may be offensive to some listeners).  Episode 2 – Trust me doc, I’ve got a brain tumor. It’s not easy to find the humor in a tumor, but that’s exactly what our latest guest did! Join Steve and Paul for a conversation with Marian Salzman, senior vice president of communications at Philip Morris International, as she recounts her self-diagnosis of a benign brain tumor and her experience working with her doctors as a three-time brain tumor survivor. Humor played a major role in Marian’s ability to not only survive but thrive. She also explains her role at PMI in educating smokers and potential smokers about the dangers of tobacco. It can’t be easy trying to re-position a brand that’s always been associated with cigarettes, but Marian’s doing it and she’s using the power of humor to lead the rest of the organization. Click here to listen to the episode. Episode 1 – What’s Your Best Lawyer Joke?. In our inaugural episode, Steve and Paul chat with award-winning journalist and former Deputy Chief at the U.S. Department of Justice, Michael Zeldin, who has covered the Mueller investigation, the Clinton impeachment and the OJ Simpson murder trial. Listen to some of Michael’s favorite lawyer jokes, how he uses humor to help him cope with the daily influx of negative news, and his reflections on the crazy days of ’94 when the world was watching the LAPD chase OJ in his white Ford Bronco. Click here to listen to the episode.