Home / Ideas • Our POV • Thought Leadership / Comedy is in our DNA

The following blog post recently appeared in CEO Steve Cody’s RepManBlog and can be found here. 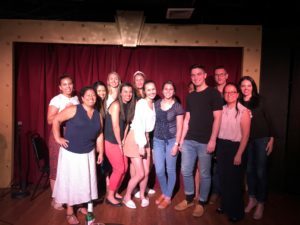 Beginning about 12 years ago, I injected stand-up and improvisational comedy into the body of Peppercomm. The results were nothing short of game changing and played a critical role in our winning so many workplace culture awards.

Fast forward to today and the new, red hot Peppercomm (see my recent Tweets about being named US AOR for three global brands) and comedy training for our team is something still very much a part of our DNA.

Last week, Sir Clayton of Fletcher (aka Clayton Fletcher), led a half-day stand-up session for 12 of our newer employees.

Clayton (@claytoncomic), Peppercomm’s chief comedy officer (Note: he is one of two chief comedy officers in the world. The other works at a nuclear power plant in Kazakstan), was kind enough to pen today’s guest blog which features one of last week’s stand-up training participants, Janine Savarese.

I think you’ll find their conversation interesting since it captures the why of why we did this for so many years in the past and why we will continue to do so for many years to come:

Comedy is one of Peppercomm’s key differentiators since oh-so-many agencies take themselves oh-so-seriously. Not us 😎

As Peppercomm’s Chief Comedy Officer, one of my responsibilities is teaching all Peppercommers how to do stand-up comedy. Seriously! After a recent comedy training session at Broadway Comedy Club, I spoke with Peppercomm’s new Senior Vice President, Janine Savarese, shortly after she made her “comedy debut” in front of her fellow Peppercomm employees.

CLAYTON: First off, congratulations on joining my favorite company this past January. How have your first seven months on the job been?

JANINE: Joining Peppercomm has been great! I’ve spent the majority of my career on the agency side of the business, and had my own consultancy before joining Peppercomm. I’ve been familiar with Peppercomm for a very long time and I’m excited to now be a part of such a creative and progressive firm. I feel very fortunate to have been able to join this talented team at a particularly exciting time for the company.

C: Now you’re a busy person, juggling a large roster of clients and managing countless other responsibilities. What was your reaction when you were told that you were coming here, to Broadway Comedy Club, for a class in stand-up comedy?

J: I thought I might be able to get out of it! I was terrified, honestly. When I was younger, I was never afraid of public speaking or performing. When you started talking about how it’s normal to get nervous when getting up in front of people, it hit home for me. In the last few years, I’ve noticed that I am so critical of myself now in these situations, especially when I am nervous and have seen that as a weakness in myself. One of the key lessons I learned through your session, is that being nervous conveys to the audience that I am emotionally invested in the presentation, and that causes them to care about me as a human being. Clearly, that’s a relationship I want to be able to build with anyone with whom I come into contact, so I’m now less critical of my nervousness and more accepting of it. And, a little less nervous too!

C: Well, the truth is you didn’t seem nervous at all, just fired up, excited and passionate about the story you were telling. Audiences want to see someone take a risk, and the longer you were on onstage, the more risks you took. I watched you become increasingly invested in your story about how your husband didn’t make the bed properly, and I couldn’t stop laughing! Do you think it will be easy to translate that fearlessness into your job?

J: Yes, I do. What was so rewarding about the process was learning about myself. It made me think differently about how I interact with others. Addressing my fear was exhilarating, but the real takeaway was rethinking how I connect with an audience, whether it’s one person or a hundred. At the end of the day, people care about the time they spend with others, and it’s reciprocal.

C: Absolutely! So many speakers forget that the audience isn’t rooting for failure. In the comedy club, everyone hopes I’m funny. Likewise, you’ve never gone to a business presentation in hopes that the speaker would make no sense and have no connection with the crowd. We all want the same thing, a real story that inspires us.

J: And another major takeaway was the importance of listening. Learning to pick up on cues, both verbal and nonverbal. Particularly in a new business pitch, feeling the sentiment in the room is so important, because if it’s not resonating you need to change course! I think too many times we forget that and just focus on all the points we want to make, or even our own nerves, rather than really listening and connecting with the other people in the room with us.

C: How was the comedy training session different than you thought it would be?

J: Well, first off, just walking into this place and feeling the creative energy here was unexpected. I thought we’d be in a conference room somewhere, fluorescent lights, and some guy would try to teach us all how to be funny. I’ve always thought you’re either funny or you’re not. But as I stood in the hallway on my conference call, I noticed all these creative types roaming the hallways, pictures of Rosie O’Donnell and Chris Rock on the wall, and I knew I was in for something different. Especially as a big fan of The Marvelous Mrs. Maisel, I started to feel glad I didn’t actually manage to get out of it. As a group, we all got to know each other in a different way, and that was terrific. I was skeptical that I was going into a “drink the Kool-Aid” situation, but I was pleasantly surprised at how much value there was to it. The three hours flew by, as well!

C: Oh, good! Do you still think that a person is either funny or not?

J: I don’t think the goal was to teach people to be funny. Instead, we learned to think about how you are with different people, and how to use a natural sense of humor in a variety of situations. We learned to story-tell in a different way. We learned to use our powers of persuasion, how to communicate in a clear way, and the importance of having fun! I was also shocked at how funny some of our quieter, more introverted colleagues ended up being too.

C: Most of the hilarious professional comedians I know are introverts at heart. I think the public would be very surprised to meet some of the dynamic and charismatic performers they’ve seen here, after the show ends.

J: Well, that’s something too, isn’t it? Sometimes the best experiences in life are the most unexpected.